As Jancis Robinson says: “This comes from one of my favourite producers of one of the world’s favourite wines.”

Dog Point Vineyard was established in 2002, by partners Ivan & Margaret Sutherland and James & Wendy Healy. It is run by members of the original Cloudy Bay team before that producer became so well known. With a passion for producing premium organic wine, Dog Point Vineyard has become widely regarded as one of New Zealand’s top producers of Sauvignon Blanc, Chardonnay and Pinot Noir. The name is from early settlement of Marlborough, when sheep were introduced to the area. Without many fences, boundaries were established by dogs, some of which got lost, bred and made their home as a pack in the hills overlooking the Wairau Plains. This became known as Dog Point. Naturally, there is a pack of dogs – albeit much more friendly – always ready to greet visitors of the winery.

A key part of the organic philosophy is biodiversity on the Dog Point property and much of the land is still used for pasture and orchards, as well as thoughtful plantings of Sauvignon Blanc, Chardonnay and Pinot Noir. Older well-established vines are situated on free draining silty clay loams. This is supplemented with more recent plantings on closely planted hillside blocks on soils with a clay loam influence. All fruit is hand-picked from low cropped vines from one of Marlborough’s oldest privately established vineyards. While the Sauvignon Blanc is made in stainless steel, the Section 94, Chardonnay and Pinot Noir enjoy extended barrel ageing with minimal racking and handling. 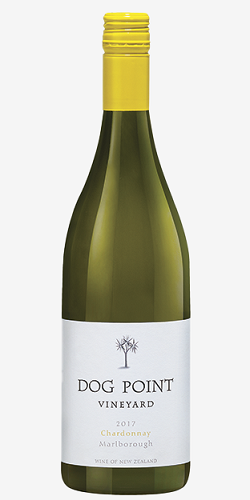